Stabilization by Configurational Entropy of the Cu(II) Active Site during CO Oxidation on Mg0.2Co0.2Ni0.2Cu0.2Zn0.2O

The interesting mechanisms of CO oxidation on the novel Mg0.2Co0.2Ni0.2Cu0.2Zn0.2O high entropy oxide were studied by means of operando soft X-ray absorption spectroscopy at APE-HE beamline.

The recent discovery of a new class of materials, named high entropy oxide (HEO) lead to attractive applications. HEOs are a class of materials composed by multi-elements system (generally, five components or more) in a particular crystal structure (usually, different from that of the parents compounds). In this way the resulting effect is to increase the total configuration entropy. In this study the mechanisms of CO oxidation on the Mg0.2Co0.2Ni0.2Cu0.2Zn0.2O high-entropy oxide were studied by means of operando soft X-ray absorption spectroscopy.
This type of HEO has a rock-salt structure with all the cations are formally in the M(II) oxidation state. The catalytic activity of the Mg0.2Co0.2Ni0.2Cu0.2Zn0.2O HEO at quite low temperature (250°C-300°C) toward the CO oxidation reactions make it as a good candidate for this kind of application but at the same time lay questions concerning the mechanisms of the catalytic circle, as none of the parent oxides has such a reactivity. The interesting queries involve the information on the local electronic structure of the transition metals (Co, Ni, Cu, and Zn), their oxidation states, the nature of the active surface site, and possible changes in all of these properties during the reaction course. For this purpose, the operando soft X-ray absorption spectroscopy (soft-XAS) experiments at the L2,3 edges of the transition metals (TMs) was performed. 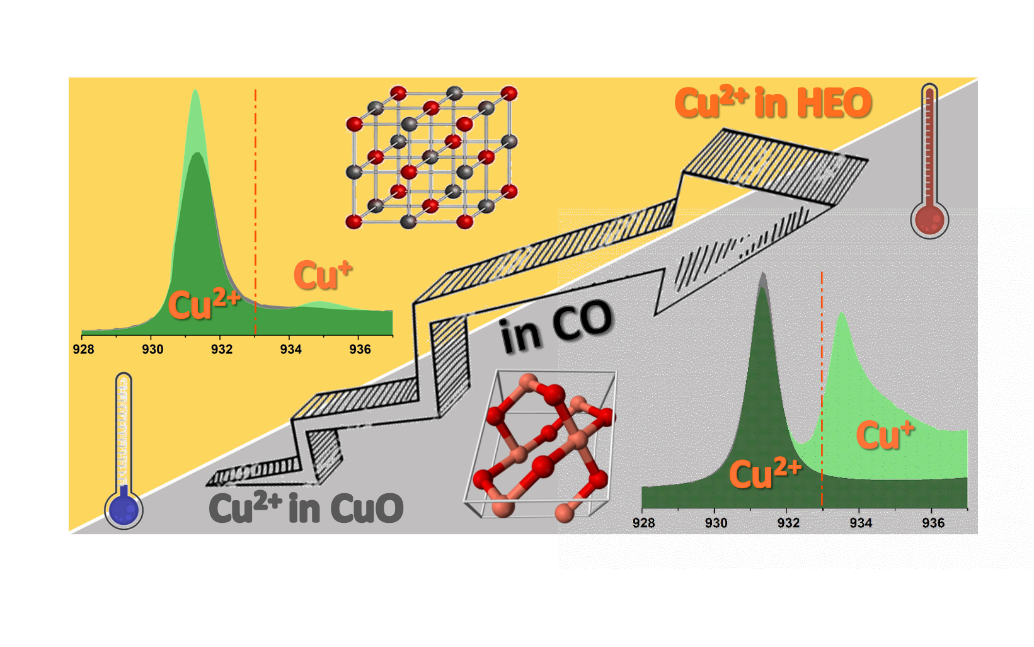 The oxidation state of Cu, Co and Ni is confirmed to be 2+, as visible from the M L2,3-edges collected at 1 bar of He flux at room temperature in figure 1, 2. During the heating at . 250 °C in the stoichiometric CO + 1/2O2 gas mixture, a peak at ca. 934.8 eV starts to appear indicating the formation of Cu(I) sites (Figure 1). The CO2 formation reached the maximum rate at 250°C, as detected by a gas sensor located in the output of the cell reactor. The Cu(II) oxidation state can be recovered by treatment of the sample with O2 at ca. 250 °C. This result shows unequivocally that CO oxidation on the HEO proceeds via adsorption of CO on the Cu sites at the surface. This adsorption causes a charge transfer from CO to Cu, thus leading to Cu(I). Then, if the temperature is high enough to allow the oxidation of adsorbed CO by O2, CO2 leaves the surface and some Cu(I) is reoxidized to Cu(II). While the Ni and Co sites act as spectators, indeed any changes at the Co, Ni L2,3 edges were observed (Figure 2). The HEO is proved to be stable during the CO oxidation. In fact, the treatment in CO during heating was observed on the CuO where an heavily reduction of Cu(II) started at 150°C (Figure 1b). Thus, this evidence suggests that the high configurational entropy of Mg0.2Co0.2Ni0.2Cu0.2Zn0.2O stabilizes the rock-salt structure and permits the oxidation/reduction of Cu to be reversible, thus permitting the catalytic cycle to take place. 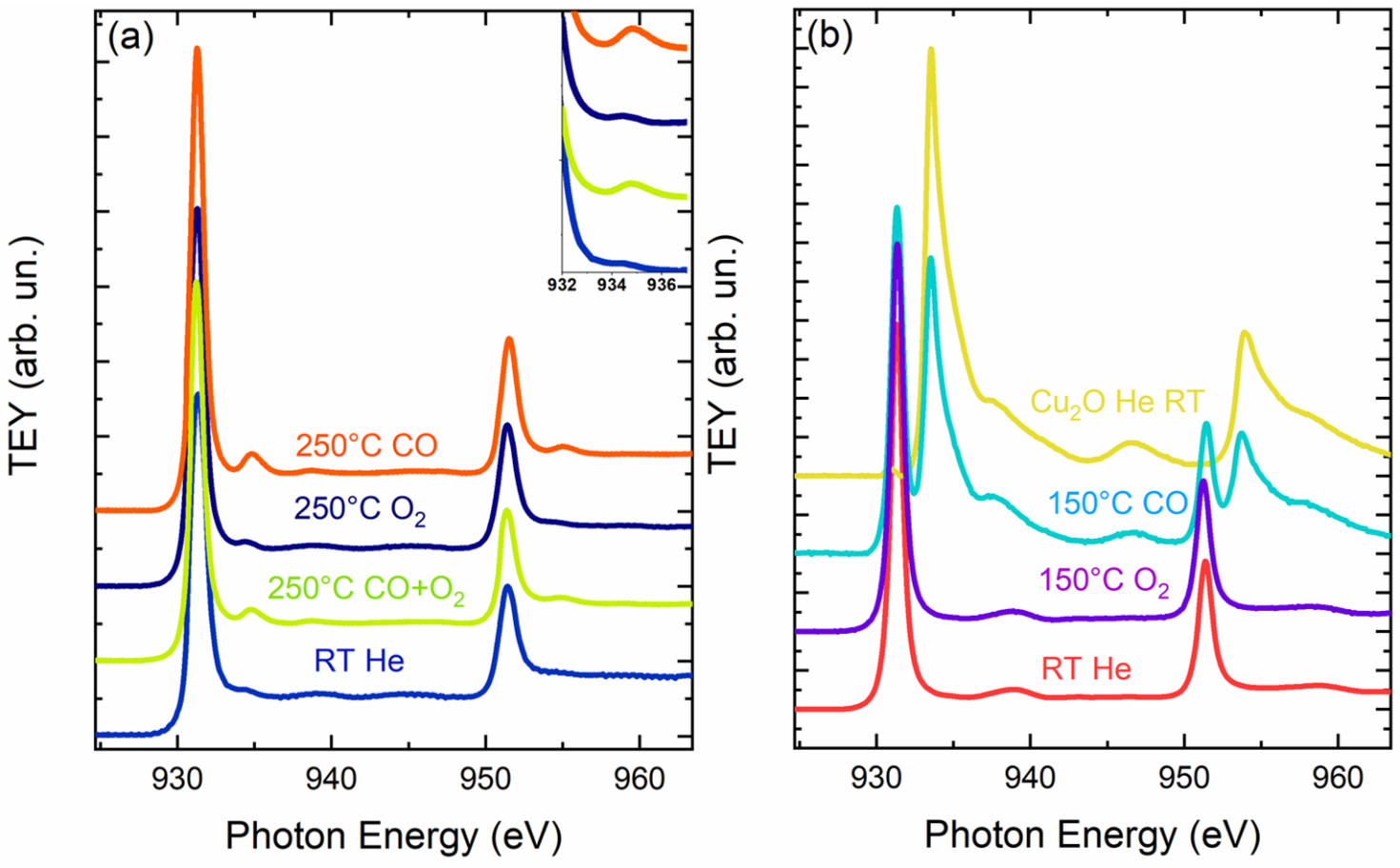 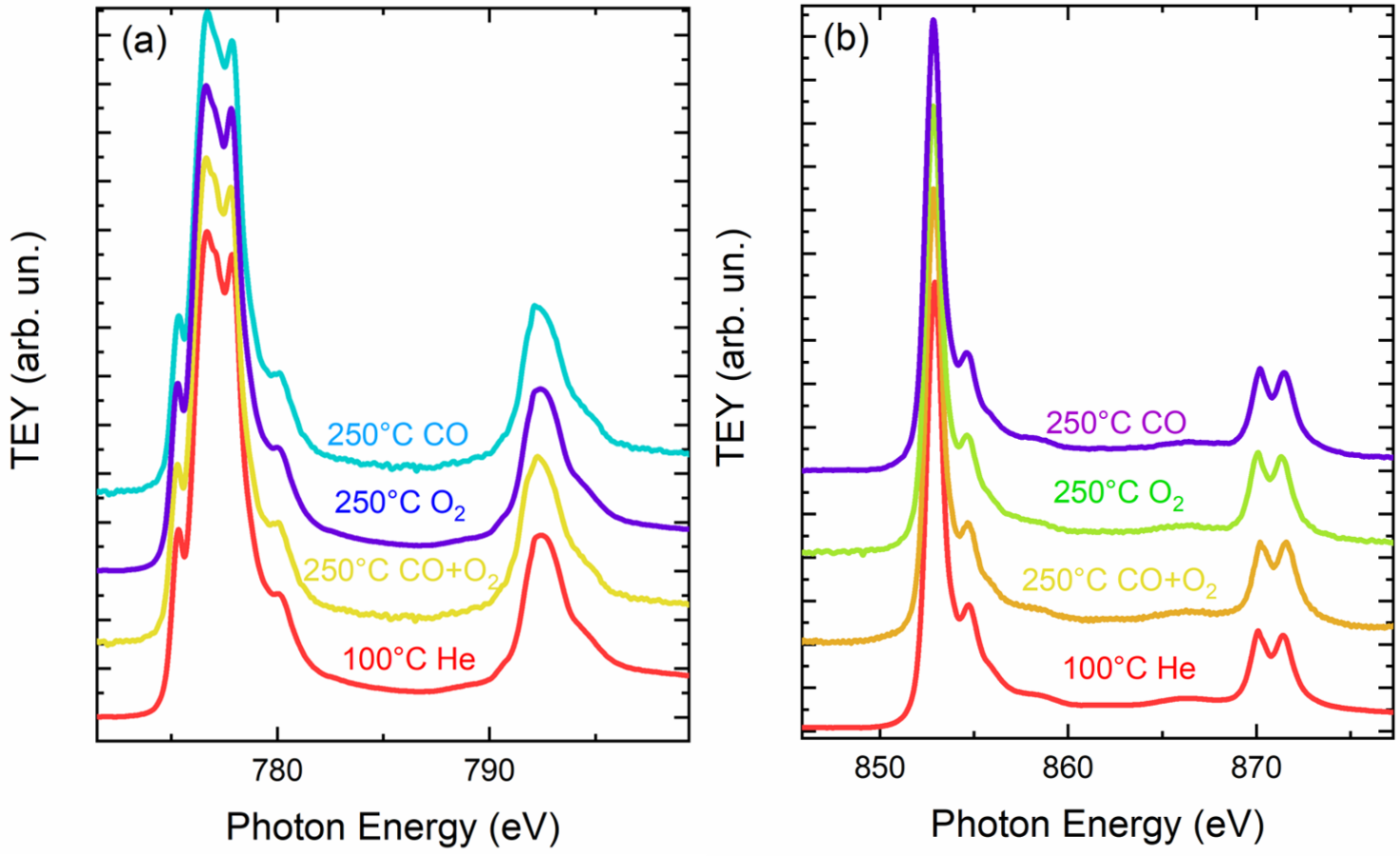