X-ray Photoelectron Spectroscopy (XPS) at APE-HE can be exploited as a surface chemical analysis technique: the valence band DOS reveals the orbital contributions through cross-section analysis (photon energy dependence) and core level photoemission is sensitive to the local environment of a given atomic specie in the sample or at the surface. The photon energy range available allows to excite relatively deep core levels (up to 1600 eV) or to have relatively high kinetic energies for shallow core levels, probing variable depths of the material.

X-ray Absorption Spectroscopy (XAS) at APE-HE can be exploited to detect surface or buried atomic species displaying characteristic absorption edges in the relevant energy range (150-1600 eV) and to exploit the linear polarization of the beamline (horizontal and vertical) as a "search light" and for X-ray Linear Magnetic Dichroism (XMLD) as well as the circular polarization for the XMCD spectroscopy and magnetometry (element specific ferromagnetic hysteresis loops, sum rule analysis).
Three picoammeters are used during each XAS spectrum. One records the drain current at the entry of the end station (mesh) for intensity normalization, a second one measures the drain current of the sample, and a third one records the drain current of a reference sample, covering the whole range of energies, which is used as a reference of the photon energy.

APE-HE end station is a UHV chamber equipped with a 4 axis manipulator and an hemispherical electron energy analyzer. It is built as a vibration-free sample chamber with mu-metal shielding for reducing the background H-field. The sample manipulator allows X-Y scanning on the surface with 1 micrometer precision and is therefore suitable to perform experiments on microstructures. The sample environment allows for temperature control (He-flow cryostat and heating stages) with feedback, for H-field application in the surface plan up to 0.1 T and for E-field application up to 500 V between contacted surfaces and substrate. The detection of total electron yield (TEY) is achieved by measuring the drain current with a high sensitivity electrometer and highly shielded connections, or with an in vacuum electron multiplier. The detection of total fluorescent yield (TFY) is achieved by an in-vacuum photodiode. Continuous scanning of the monochromator for XAS spectra is available for superior speed. Step-by-step scanning is also available and used to perform highly sensitive XMCD while switching the magnetization of the sample at each point.

Two independent electrical connections on the measuring position of the sample allow applying electric bias during or in-between the measurement. The possibility of combining electric and magnetic fields allows studying the chemical and magnetic behaviour of multiferroic materials and heterostructures. 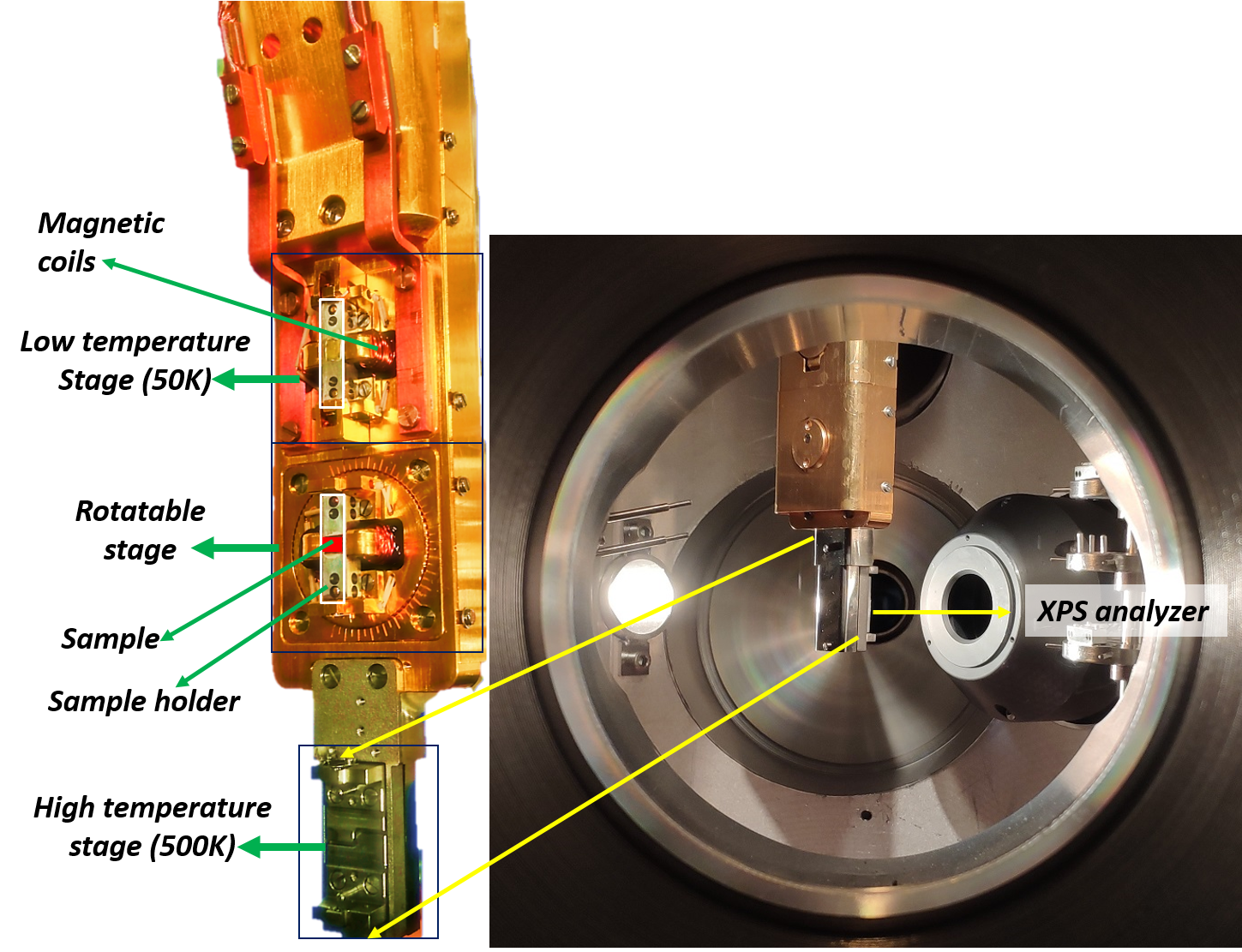 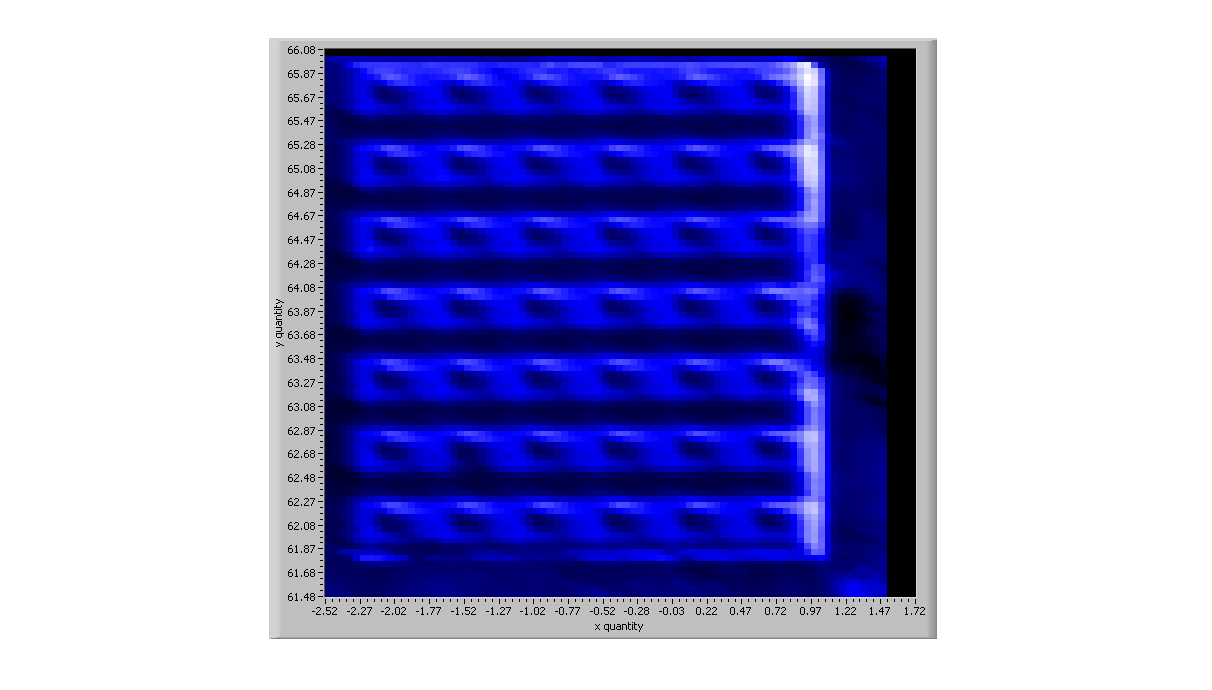 XY manipulator scan of a pattern of oxide rectangles (300 x 100 m2) in metallic frame. The image has been obtained measuring the drain current of the sample

XY manipulator scan of a pattern of oxide rectangles (300 x 100 m2) in metallic frame. The image has been obtained measuring the drain current of the sample 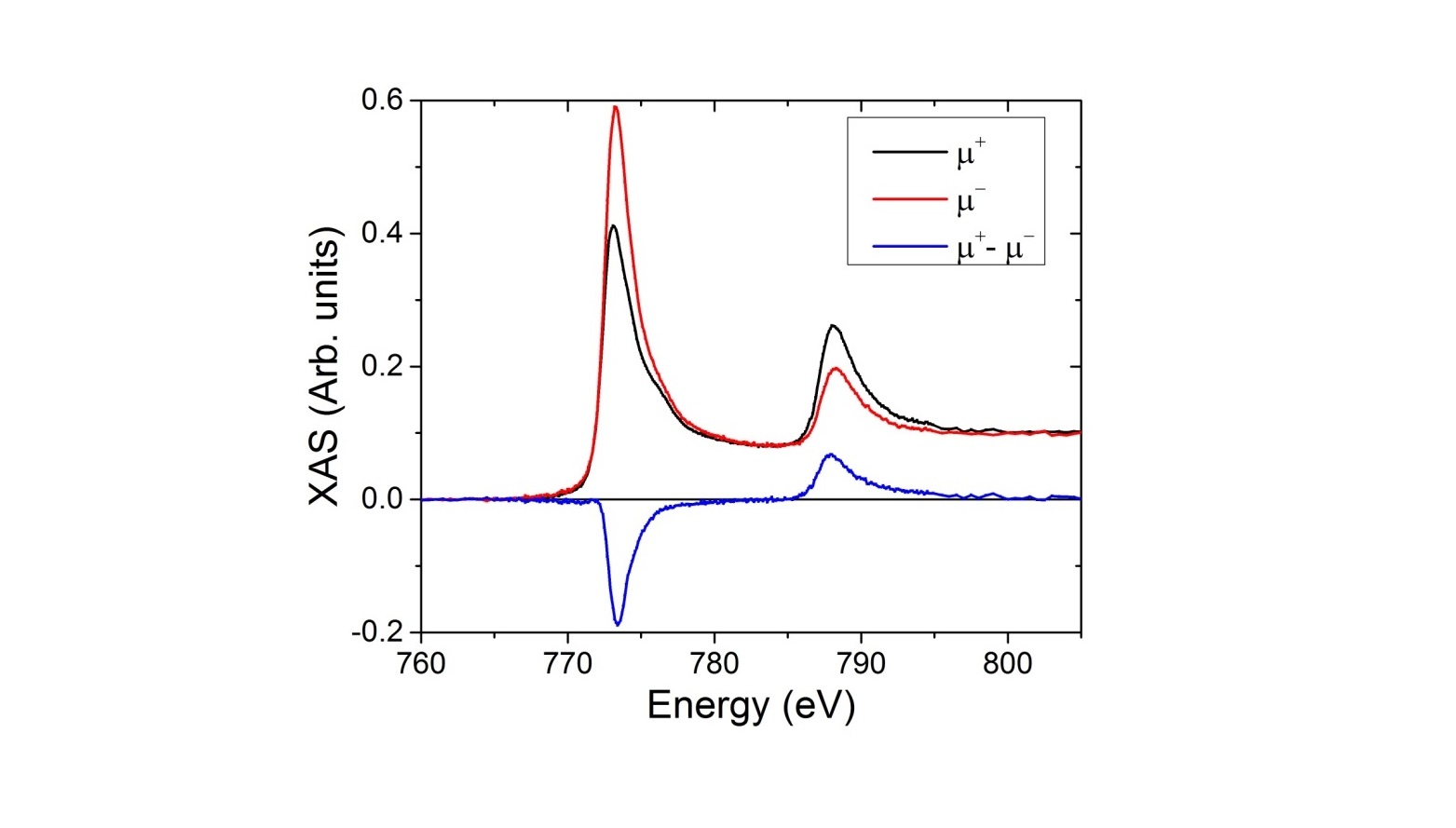 XMCD spectrum of a 0.5 nm Co film deposited on iron substrate recorded reversing the magnetization at each point

XMCD spectrum of a 0.5 nm Co film deposited on iron substrate recorded reversing the magnetization at each point 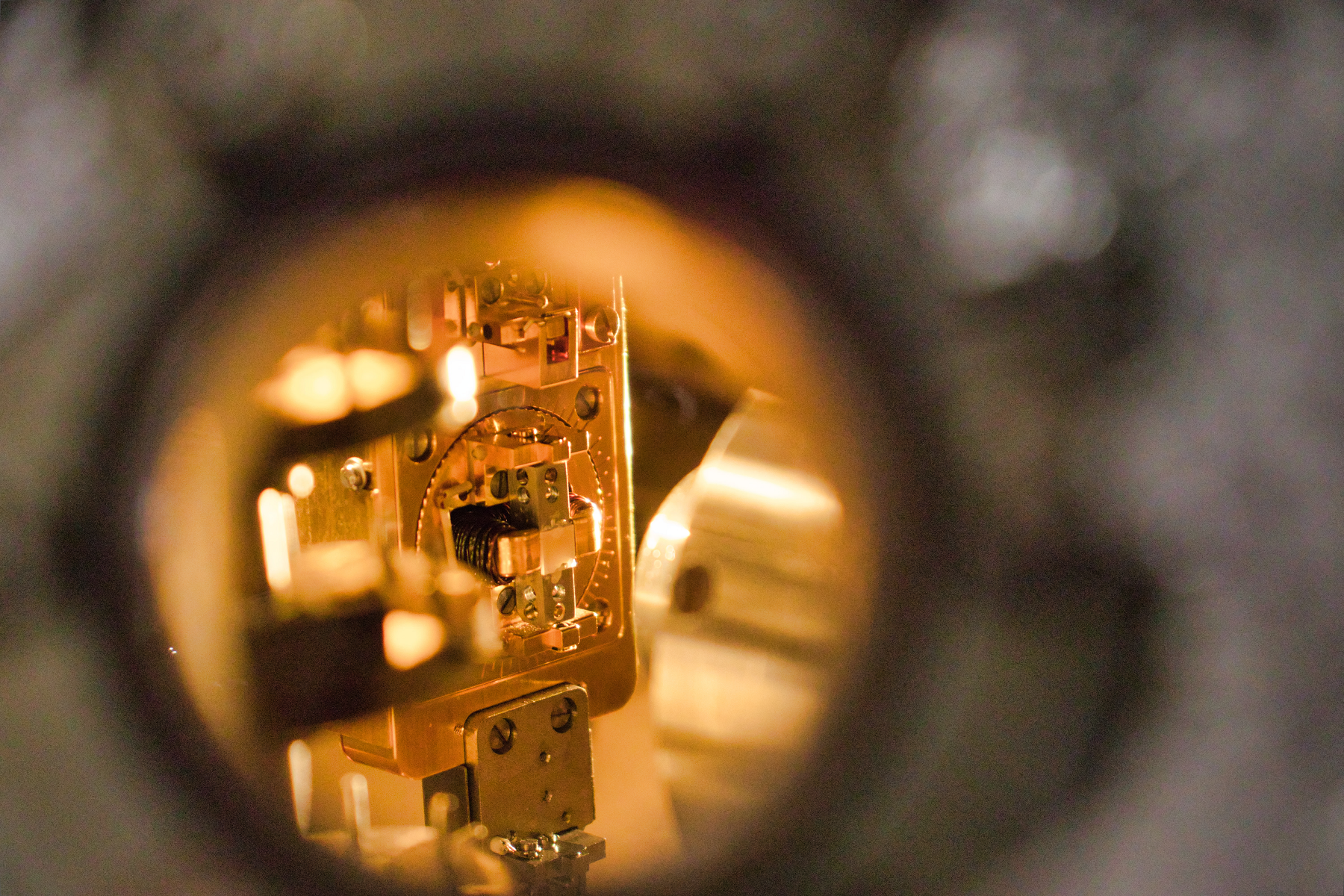 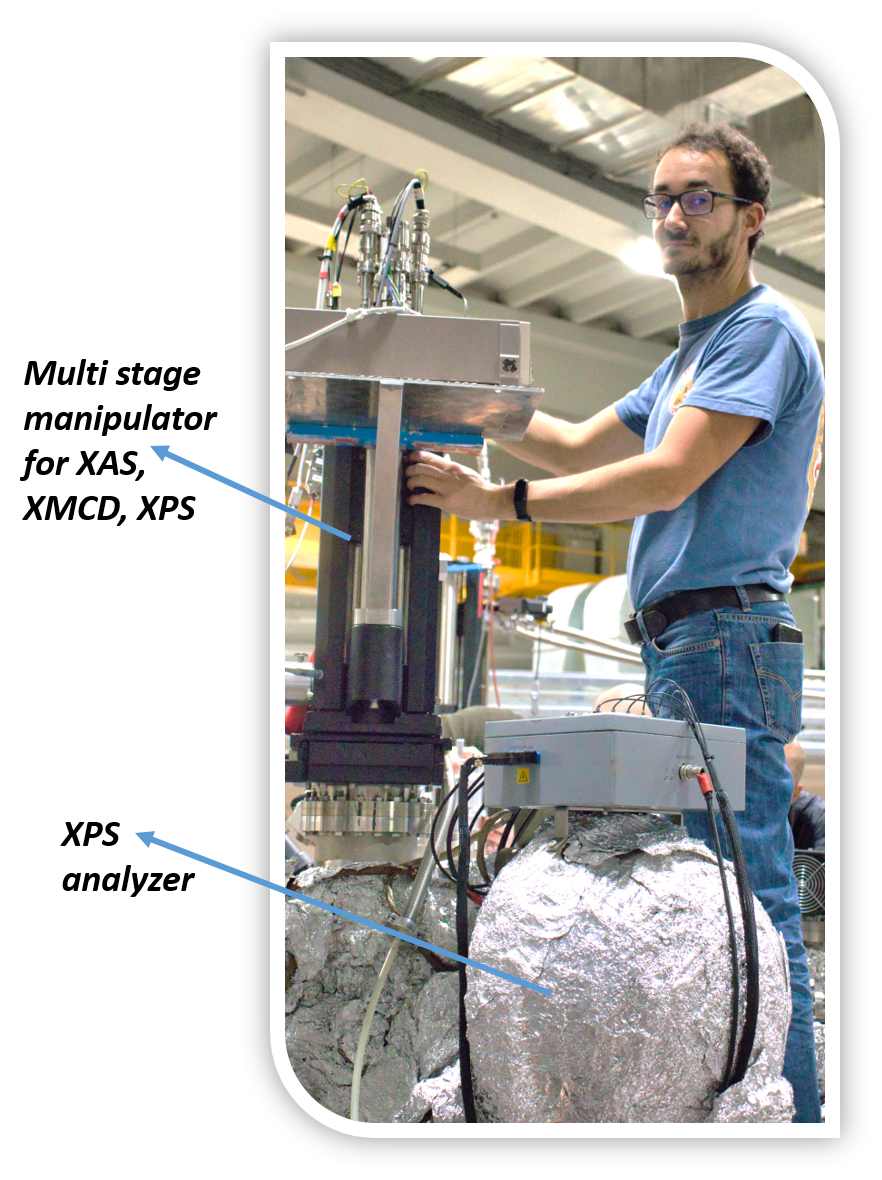 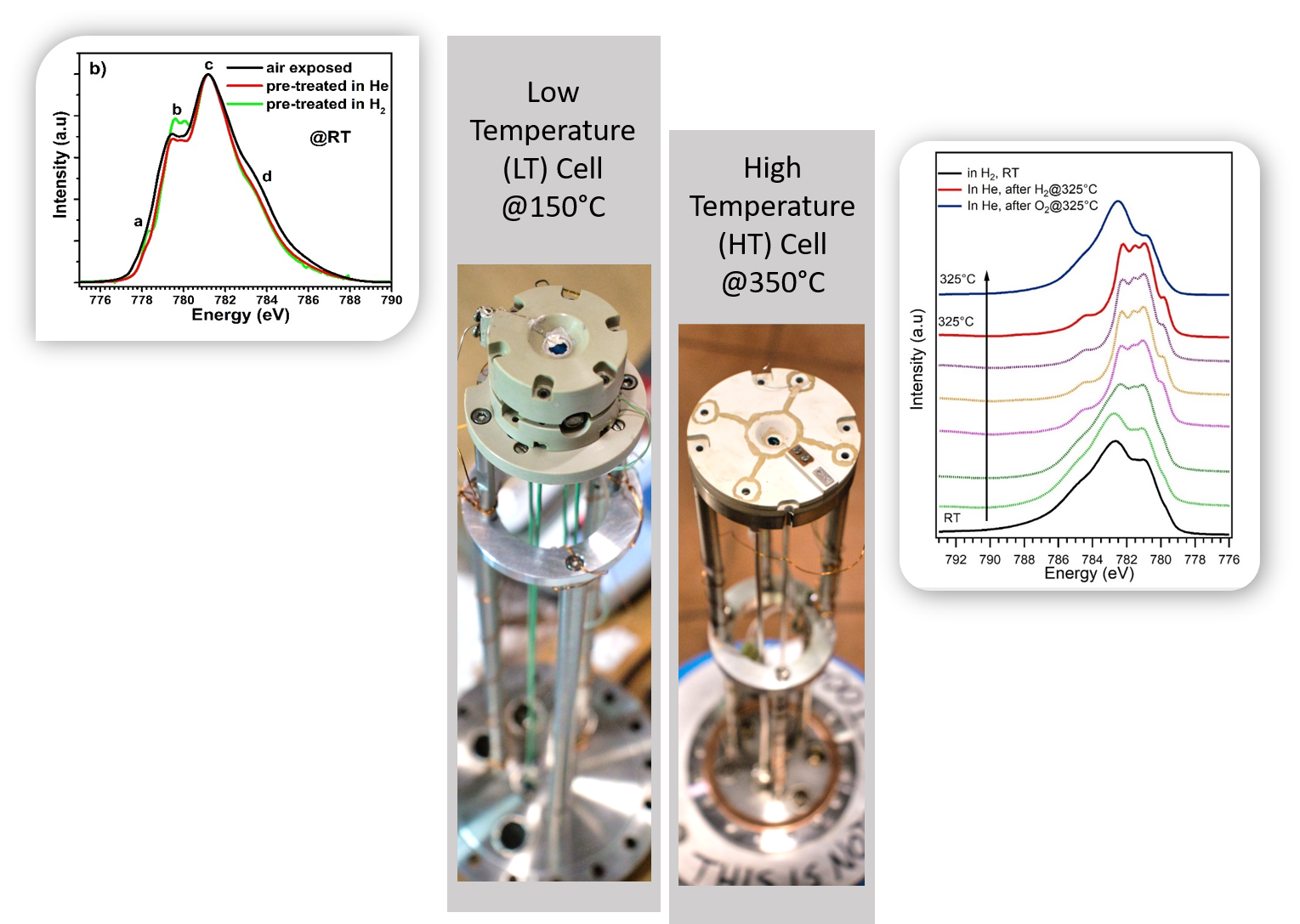 Together with the UHV setup, APE-HE allows performing experiments at ambient pressure. The system is composed by a DN 100 CF flange on which are fixed 3 inox sticks that support the reactor and connect it rigidly on the flange. The movement of the system is then ensured by a XY manipulator mounted on the rear flange of the APE-HE chamber on which the cell is attach. In this geometry the X ray beam impinges normal to the cell, which can be moved in the plane perpendicular to the beam in order to center the 500x500µm Silicon nitride window. The cell has two independent electrical contacts, one on the sample and one on the membrane; this allows polarizing the membrane at positive bias voltage and recording the total electron yield (TEY) on the sample by measuring its drain current. In this way it is possible to record XAS spectra of the sample while keeping the sample at ambient pressure and/or expose it to a desired gas (or a mixture of gases). The XAS spectroscopy provides a number of information on the electronic state of the material, starting from the oxidation state of each element and going in greater details like the symmetry of the ligands. In figure 4 is depicted the TEY spectrum of the Ce M4;5 absorption edge in Ceria/YSZ, using the fast data acquisition mode. The fast acquisition mode the XAS spectra allows the recording of XAS spectra with a great statistics in a time scale between seconds and few minutes. This will allow following the evolution of the reaction and not only the initial and final products of a reaction. 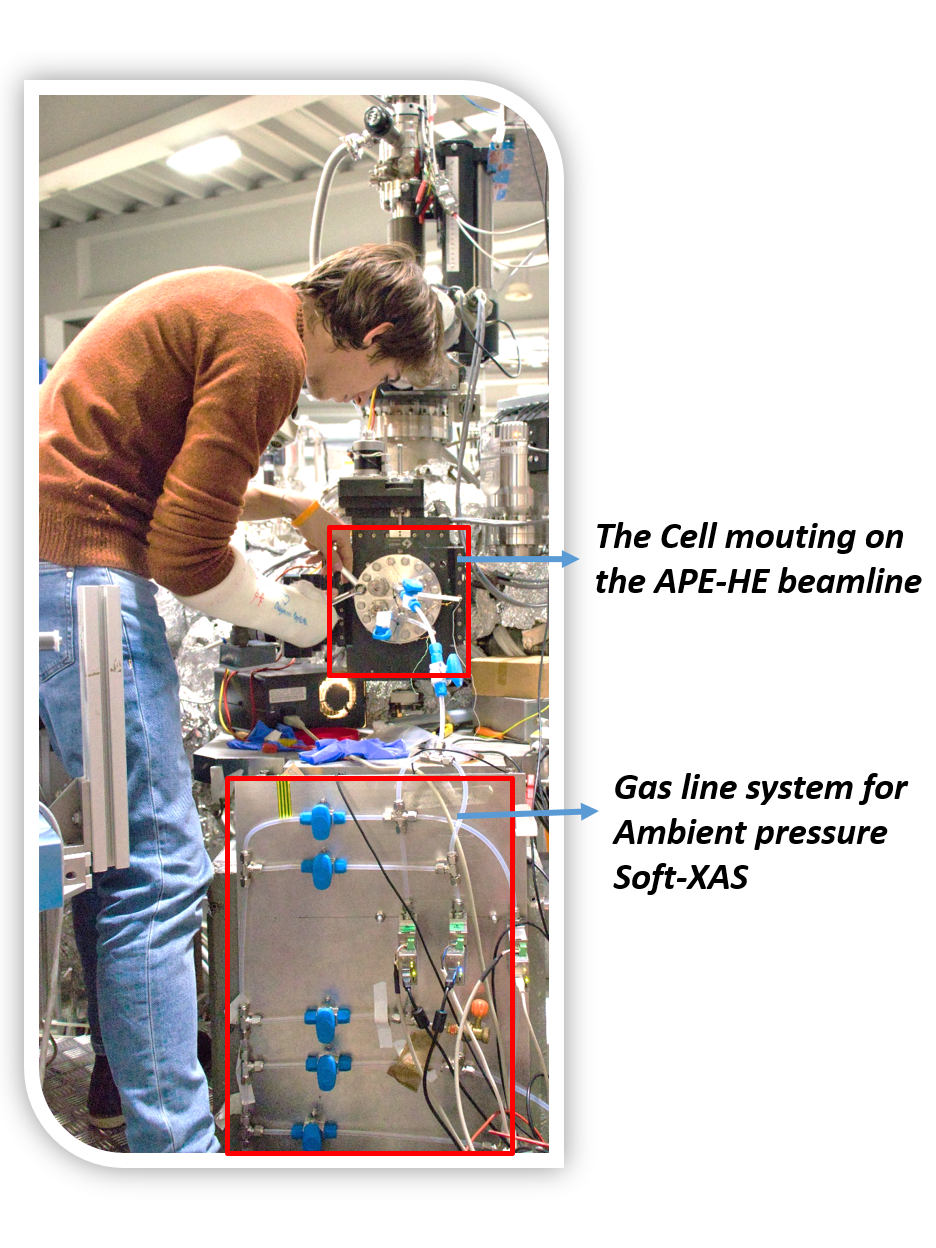 Picture of the different elements of the reactor cell

Picture of the different elements of the reactor cell 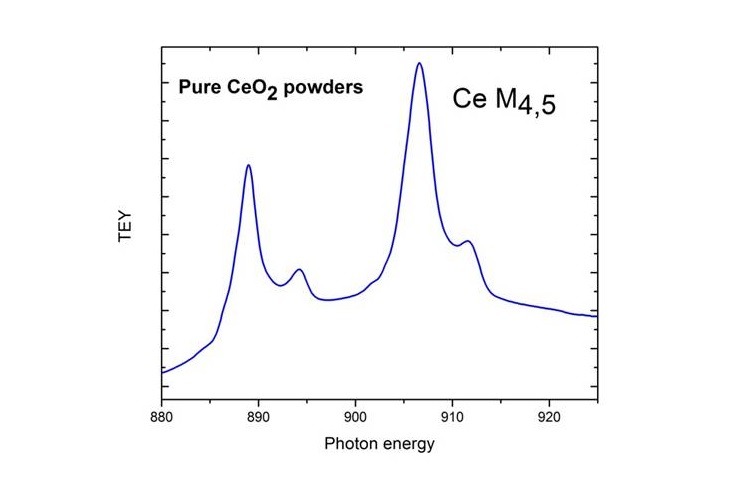 XAS spectrum of CeO2 pure powder acquired at 1 Bar of pressure of pure Helium at room temperature. The total acquisition time of the spectrum is 60 seconds

XAS spectrum of CeO2 pure powder acquired at 1 Bar of pressure of pure Helium at room temperature. The total acquisition time of the spectrum is 60 seconds

Schematic cross section of the reactor at the sample level

Schematic cross section of the reactor at the sample level 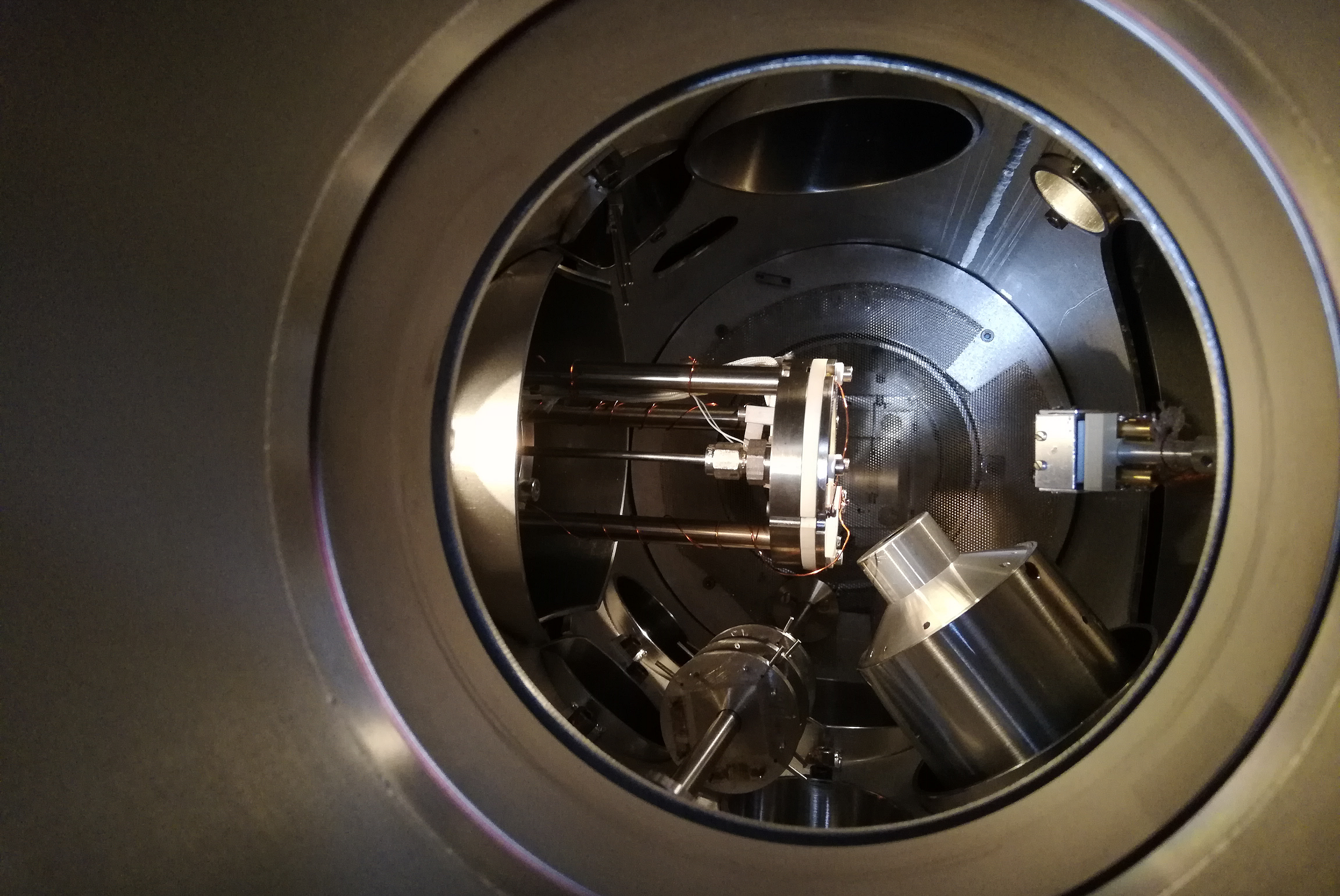