A pulsed laser radiation to deposit thin films on a substrate

The Pulsed Laser Deposition (PLD) is a thin film deposition in which a pulsed laser radiation shots a "target" sited on the beam focal plane, inside a vacuum chamber. The laser energy causes the ablation and the evaporation of the chemical compounds in the target and produces a flux of material, named "plume". Such a material, under form of plume, arrives on a substrate and, at the opportune growth conditions (substrate temperature, atmosphere pressure, etc.), the growth of a thin film takes place. Usually the plume (composed not only by ions and electrons, but also macromolecules or macroscopic particulates) conserves the stoichiometry of the target, equal to that composing the deposited film. Moreover, since the ablation of the target is assisted by the laser, the deposition can occur either in ultra high vacuum as well as in a background gas (up to several mbar).

Within NFFA-Trieste, we here propose the installation of a multi-purpose Pulsed Laser Deposition system directly connected to APE beamline of the ELETTRA synchrotron radiation facility, where angle-resolved photo-emission spectroscopy (ARPES) experiments can be performed. As a matter of fact, a very few ARPES systems integrated with deposition system has been proved to allow “Direct ARPES” (DARPES), on uncleaved in-situ grown thin films, thus circumventing all the surface-related problems, by allowing the synthesis and the characterization within the same ultra-high vacuum manifold, avoiding any surface contamination.

Nevertheless, to date, DARPES on thin films and heterostructures mainly confined to small laboratories. We here propose to build-up a deposition facilities directly connecting on a LSF beamline thus removing the strong limitation of ex-situ transferring of synthesized samples, thus boosting the investigation of physical properties of complex materials and heterostructures by all synchrotron based surface-sensitive spectroscopic techniques. 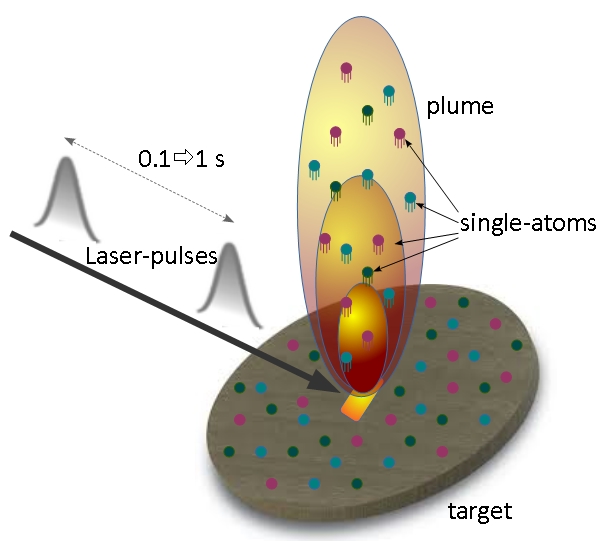 Cartoon of the ablation process of a complex target by pulsed laser irradiation. In the optimal condition, the ablated plume is composed by single atoms only.

Cartoon of the ablation process of a complex target by pulsed laser irradiation. In the optimal condition, the ablated plume is composed by single atoms only. 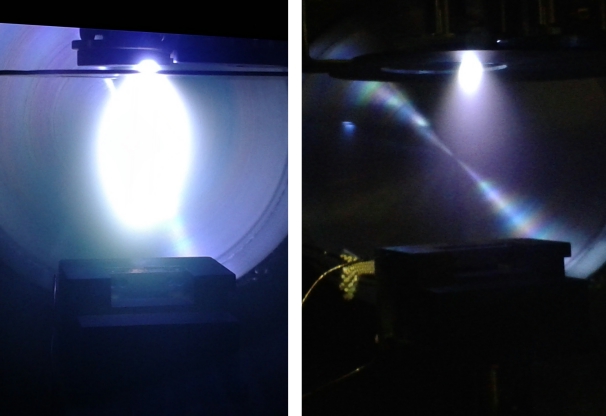 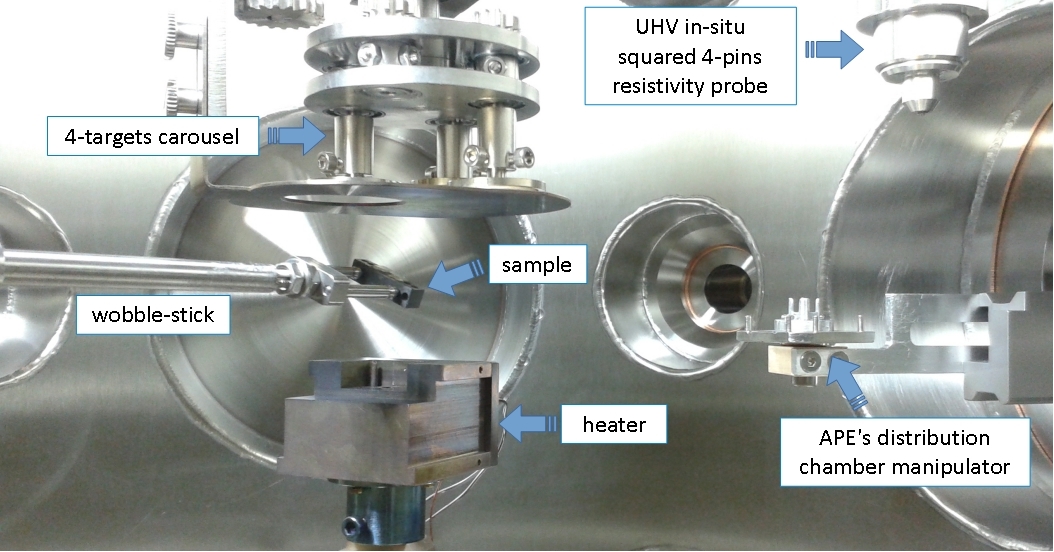 PLD facility is equipped with two laser sources, namely a KrF excimer (L = 248nm) Nd:YAG laser (L = 1064nm) lasers, optimized to ablate both insulating as well as metallic targets. The growth process can be monitored by reflection high-energy electron diffraction (RHEED). RHEED works by sending a narrow electron beam at the sample surface at grazing incidence. The reflected and diffracted beams are observed on a phosphor screen with a camera and shows oscillation in the intensity as the growth proceeds layer-by-layer. At APE-NFFA, a Near-Ambient Pressure RHEED (NAP-RHEED) is available and can monitor the growth process up to 1.3mbar. 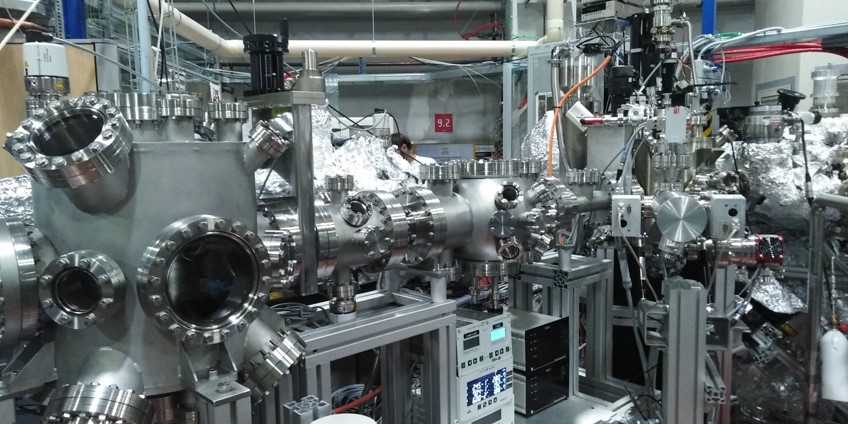 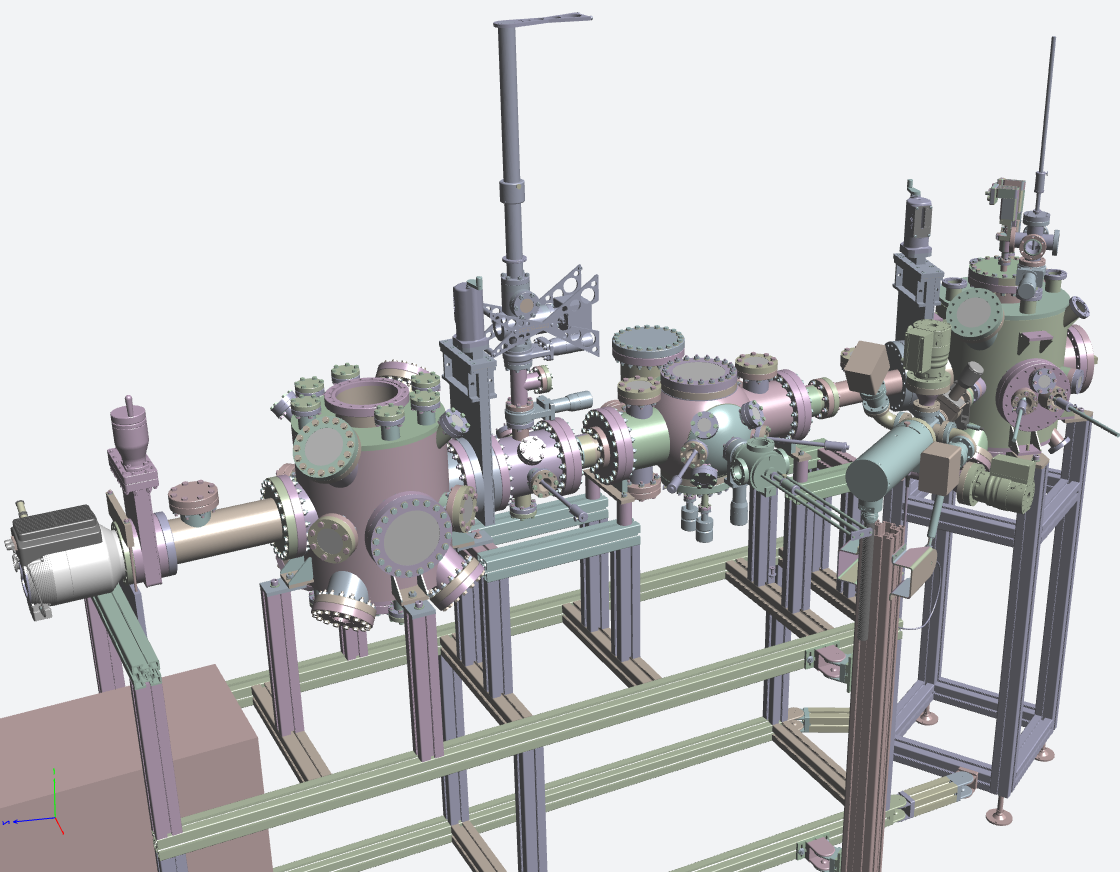 In 2021, a second PLD chamber has been fully assembled and connected to the first one through a UHV transfer system, creating an innovative dual-PLD system.

PLD-I is used for oxides and PLD-II for metals, so as not to oxidize the metals present in this chamber.

The UHV transfer system will be exploited for the growth of heterostructures with excellent quality interfaces, with the possibility to transfer in UHV to other measurement systems thanks to our vacuum suitcases.

The main characteristics of a PLD system is the extremely wide range of deposition pressure (from 10-7 up to 1 mbar). The single-atomic species are supplied trough an ablation process of a target in form of polycrystalline powders and/or single crystal by the irradiation of a high-intense laser beam.

Among the possible materials which can be deposited, the oxide perovskite materials have attracted a considerable amount of interest due to the wide spread of technologically important phenomena which can be displayed. By taking advantage of the high structural and chemical similarities between these materials, the growth of oxide perovskite heterostructures has reached an extremely high level of crystal perfection. Indeed, the similar lattice coordination and parameters allow the epitaxial growth of multi-layered systems, while their high chemical stability minimizes the atomic inter diffusion. Multi-layered systems can be seen as artificial multi- functional materials (i.e., materials in which several physical phenomena are present), where different components can be merged together to display targeted properties. However, when an extremely high level of structural perfection of thin films heterostructures is achieved, new phenomena and functionalities, not exhibited by either of the constituents, can be enabled in the composite system and/or at the interfaces between the constituents.

*Growth protocol has been developed on demand