Among the various families of materials showing gapless Dirac Fermions, the transition-metal dichalcogenide TMX2 (TM = Pd, Pt; X = Se, Te), crystallizing in the same structure as the naturally occurring mineral “moncheite”, was demonstrated to host type-II Dirac fermions, with application capabilities in plasmonics, catalysis, nanoelectronics, and wearable electronics. These properties can be tuned by varying (i) the position of the Fermi level with respect to the degenerate Dirac (or Weyl/nodal line) point and (ii) the strength of the spin–orbit coupling.

Mitrofanovite Pt3Te4 has recently been discovered as a natural mineral in the Kola Peninsula, Russia. Its atomic structure is constituted by alternating layers of hexagonal PtTe2 and Pt2Te2 (or PtTe) which are stacked along the vertical direction and held together by weak van der Waals interactions. 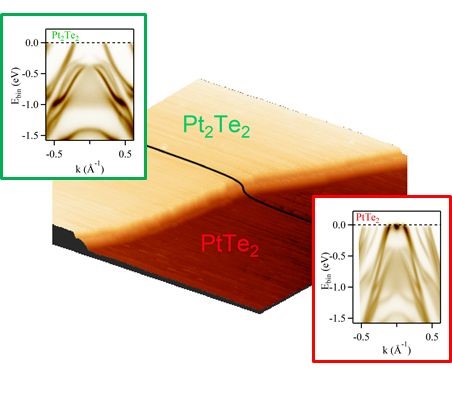