Topological insulators have attracted great interest for their intriguing conduction mechanisms. Even though they are insulating in the bulk, they show a metallic surface state characterized by a unique spin texture, as unambiguously demonstrated by spin-resolved angular resolved photo-emission spectroscopy (ARPES) experiments. Furthermore, these states are topologically
protected against scattering driven by strong spin-orbit interactions, thus being attractive as functional materials for spintronic applications.

Bi2Se3 thin films have been grown by the PLD technique, at the NFFA-APE facility of IOM-CNR and Elettra in Trieste, using a KrF excimer pulsed laser source (lambda 248 nm) and under a ultra-pure (99.9999%) Ar pressure. The Bi:Se chemical ratio, probed by Energy dispersive spectroscopy, of films grown at very high Ar pressure (i.e. 0.1 mbar) was found to be 1.5 (within an experimental error of about 5%), thus indicating a correct stoichiometry of the Bi2Se3 thin films, while growth process at lower pressure was found to promote Bi segregation. Interestingly, at deposition pressure of 0.1 mbar, the target-to-substrate distance was crucial in getting the optimal Se:Bi chemical ratio. As a matter of fact, like other complex systems, as the background pressure increases, the films are deposited from a progressively more confined ablation plume (see image). This might selectively affect both the energy and the efficiency of the single-species transferring to the growing film. This is what is likely happening also in the case of Bi2Se3 deposition, where heavy (i.e., Bi) and light (i.e., Se) elements can be stopped at different target-to-substrate distances, therefore determining slight changes in the Bi:Se chemical ratio.

Spin and angular resolved photoemission experiments were performed on in-situ transferred as-grown Bi2Se3 thin films at a temperature of 77 K and with a synchrotron radiation spot of about 100 x 50 microns. In order to better resolve the topological surface states features, ARPES investigation was performed at a suitable photon energy (i.e. 55 eV) that strongly reduces the photoemission intensity from the bulk conduction band. ARPES data of a Bi2Se3 thin film grown
on Al2O3 are shown. 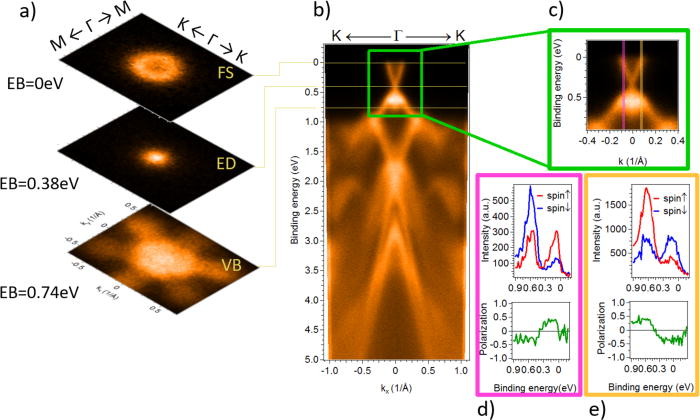 Such a feature opens perspectives in emerging spintronic planar devices based on multi-layered heterostructures technology in which one functional layer is the topological insulator Bi2Se3.

A pulsed laser radiation to deposit thin films on a substrate