A fine analysis of local structure and magnetic response of Co films intercalated between Graphene and Iridium (Gr/Co/Ir systems) has revealed how the response of such systems to annealing depends on the Co thickness.

The interest in Gr/Co/Ir systems arises from the strong magnetization of Co, coupled with the high chemical stability provided by the Gr. The magnetic response of Co depends strongly on structural details like film thickness and local arrangement of the Co atoms, hence, global treatments like annealing could be used to modify the film structure and, through it, to tailor the Co magnetic response.
This work aims to investigate the effects of high temperatures on structure and magnetism of Co within Gr/Co/Ir systems. To do so, two Gr/Co/Ir systems having different Co thickness (5 and 10 monolayers (MLs)) were prepared and analyzed upon annealing at 500 °C.

Structural details were finely investigated through Extended X-ray Absorption Fine Structure (EXAFS). Using different X-ray polarization directions with respect to the film plane, EXAFS can assess the isotropy of the Co local environment, providing information about the average Co-Co distance both along and perpendicular to the film plane. The films, both isotropic before the annealing, were found to follow a different evolution after the thermal treatment: while the 10MLs film maintained the isotropic character, the 5MLs film presented an elongation along the film plane and a contraction in the perpendicular direction.
This structural analysis was complemented by Magneto-Optic Kerr Effect measurements, aimed to investigate the out-of-plane magnetic response of the systems. Upon annealing, the perpendicular magnetic response was found to decrease for the isotropic thick film and to increase for the anisotropic thin film.

Our analysis shows that the evolution upon annealing depends on the original Co film thickness.
For thick films, annealing results into an isotropic structure and a lower magnetic anisotropy. On the contrary, thin films evolve towards an anisotropic local arrangement and an enhanced out-of-plane magnetic response. 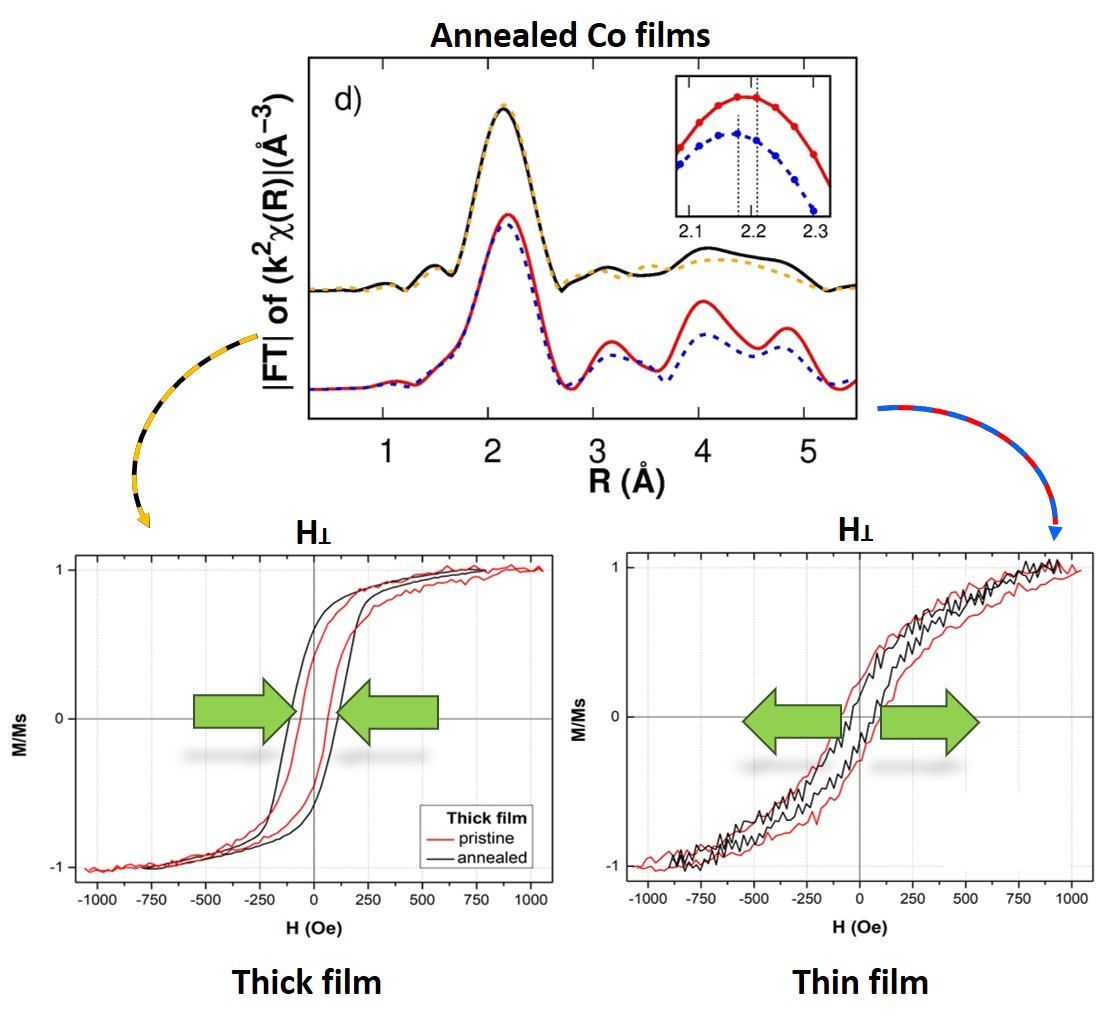 Fourier Transform of the EXAFS signal collected with the X-ray polarization parallel and perpendicular to the film plane. Bottom: magnetization curves normalized to the saturation magnetization (M/Ms). Image by Ilaria Carlomagno.

Fourier Transform of the EXAFS signal collected with the X-ray polarization parallel and perpendicular to the film plane. Bottom: magnetization curves normalized to the saturation magnetization (M/Ms). Image by Ilaria Carlomagno.