Ziegler−Natta (ZN) catalysts are at the main responsible for polyolefin production, affording at present almost 80 million tons of polypropylene per year, with a worldwide economic turnover exceeding 100 billion dollars. However, a true understanding of their properties at the molecular level is still missing. In particular, there is a lack of knowledge on the electronic properties of Ti sites. 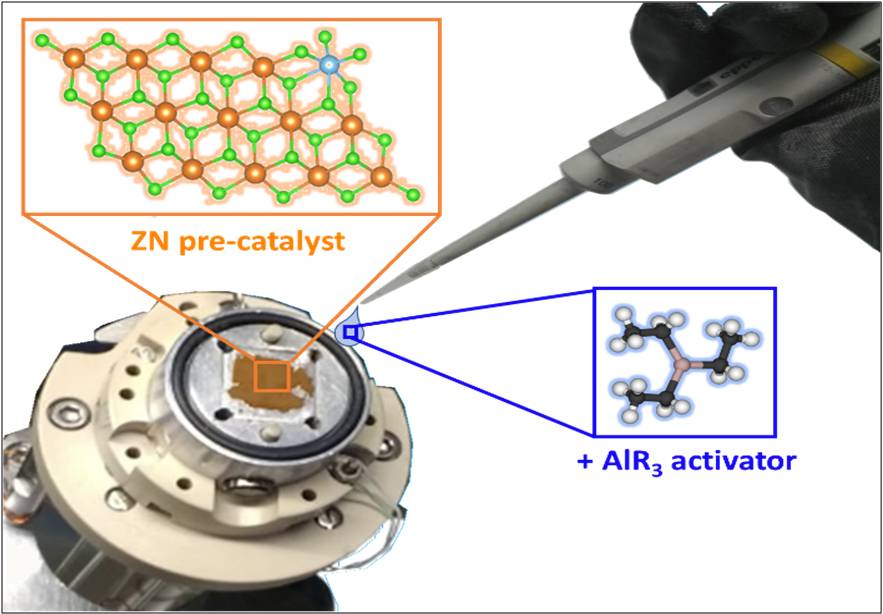 The extraordinary success of Ziegler−Natta (ZN) catalysts in terms of activity and selectivity is due to the perfect combination of four indispensable components: titanium chloride, high surface area MgCl2 as support material, electron donating organic molecules as Lewis bases (these three first components together constitute the so called “pre-catalyst”), and an aluminum alkyl activator (typically triethylaluminum, TEAl).

Albeit the general composition of ZN catalysts, optimized since their discovery in 1953 through a trial-and-error approach, is well established, so far direct experimental evidences on the different properties of the Ti sites depending on the different preparation routes are still inadequate. The majority of experimental data on ZN catalysts refer to the pre-catalysts or to aged catalysts, and usually provide information on either MgCl2 or the electron donors, while the properties of the Ti sites are only indirectly extrapolated. Filling this gap of knowledge would have a great industrial relevance, since the different Ti sites produce polymers with different properties.

To this purpose, we have carried out a systematic spectroscopic investigation (aided by theoretical simulations) of the electronic properties of the Ti sites in three different ZN catalysts, starting from the pre-catalyst, then moving to the activation by TEAl, and finally monitoring their evolution upon olefin polymerization. The three examined samples are characterized by increasing complexity: a simplified model system constituted by ball-milled MgCl2 on which is chemisorbed TiCl4, a MgCl2 ball-milled in the presence of both an organic electron donor (ethyl benzoate, EB) and TiCl4, and an industrial system obtained by reaction of a MgCl2 precursor (Mg ethoxide) with TiCl4 at 110 °C in the presence of dibutyl phthalate (DBP) as electron donor. In the article, the three samples are referred to as MgCl2/TiCl4, MgCl2/EB/TiCl4 and ZNC(DBP).

The three samples have been synthesized by JAIST in Japan and then transferred at the University of Torino, which has led the whole research activity, on the base of its renowned expertise in spectroscopic investigation. Two complementary techniques have been employed to pursue the electronic properties of the Ti sites in the three samples: diffuse reflectance (DR) UV-Vis spectroscopy (performed at the University of Torino) and Ti L2,3-edge NEXAFS spectroscopy (performed at Elettra Sincrotrone Trieste). In particular, Ti L2,3-edge NEXAFS spectra have been collected at the APE-HE beamline, adopting an ambient-pressure NEXAFS cell that allows to perform measurements in the presence of gases; that cell was developed by the APE-HE staff and optimized through an Elettra long-term project with the group of University of Torino. The collected data have been processed using THORONDOR software, another tool developed during the long-term project and now freely available for all the users, to calibrate the energy of the spectra, subtract the anomalous background produced by the interaction of soft X-rays with all of the crossed media (i.e., the cell membrane and the gas atmosphere), flatten the baseline of the spectra, and normalize the intensities (available at https://pypi.org/project/thorondor/).

Figure 1. DR UV-Vis (a) and Ti L2,3-edge NEXAFS (b) spectra of the three pre-catalysts. (b’) Second derivatives of the spectra reported in (b) in the L3 edge region.

Figure 1. DR UV-Vis (a) and Ti L2,3-edge NEXAFS (b) spectra of the three pre-catalysts. (b’) Second derivatives of the spectra reported in (b) in the L3 edge region.

Afterwards, Figure 2 displays the in situ investigation of the activation of MgCl2/EB/TiCl4 and ZNC(DBP) samples by TEAl. Thanks to theoretical calculations, the changes in the spectra have been associated to the conversion of the Ti4+ species into isolated penta-coordinated Ti3+ sites (where the reduction of the oxidation state coincides with the formation of a coordination vacancy), either with all Cl- ligands in the coordination sphere or alkylated (i.e., with an ethyl group instead of a Cl-). Furthermore, in ZNC(DBP) sample it has been observed also the formation of TiCl3 clusters, likely fostered by the severe reducing conditions due to the concentration of TEAl inside the accessible pores.

Finally, monitoring the evolution of the spectra upon olefin polymerization has allowed to identify as the only active species the isolated reduced and alkylated Ti sites, that are a consistent fraction of all the monomeric Ti3+ sites.

As a general remark, the work has prompted the development of new experimental setups and theoretical methodologies to fully exploit the potentials of two electronic spectroscopies, UV−Vis and NEXAFS, in providing direct information on the nature of the Ti sites in ZN pre-catalysts, on their changes in the presence of TEAl activator and during olefin polymerization, at the same time discriminating between active and inactive species.